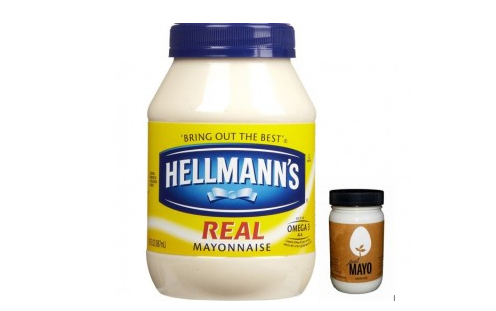 Hellmann's “A Brand With Eggs For Brains” Hellmann's filed a lawsuit against Just Mayo on Halloween, claiming that Just Mayo's egg laden label is a poor costume for a product that (proudly) bears…

In April, 2011 the Western Sugar Cooperative and 2 sugar producer/refiner/distributors filed suit against The Corn Refiners Association, Archer-Daniels-Midland and several other corn refiners for false advertising based on the…

Food in Jars all jammed up over IP! When you pay someone in jam, you can expect things to get sticky! Lots of bloggers have logo wear, including this one.…

There’s nothing sweet about false advertising litigation.  Unless of course, you are on the winning legal team, in which case victory is not only sweet but also very, very, very lucrative.  Just ask Mark Lanier, who recently was named “2012 Top Class Action Attorney” by U.S. News and World Report, and also serves as counsel to the Sugar Association.

Sugar is an important part of American culture.  I should know, having been addicted to it for most of my life (I’m on the slow road to recovery.)

Mary Poppins taught us that a spoonful of sugar not only makes the medicine go down, but in the most delightful way . . .

So then, what does a spoonful of high fructose corn syrup (HFCS) do, besides give us diabetes?

Well, that depends in part on whom & what you believe.

There’s a battle raging between the Sugar Association and the Corn Refiners Association, about which I previously wrote on September 18, 2011 and on November 15, 2011 and again on February 9, 2012.  Sugar addiction aside, the case is fascinating for other reasons as well, primarily because it is a prime example of a down and dirty false advertising dispute, in which each side essentially accuses the other of lying.

The short story is that back in April 2011, the Sugar Association and several sugar companies sued the Corn Refiners Association and several corn refiners for false advertising and unfair competition under federal law, as well as for violation of California Business and Professions Code Section 17200.  The suit claimed that the re-branding of HFCS as “corn sugar” was unfairly deceptive.

How one re-brands a generic term is a complete mystery to me; I always thought something first had to be a brand before it could be re-branded.  Of course, that’s the point the Sugar Association is hoping to make.

The court dismissed the Plaintiff’s case against the corporate members of the Corn Refiners Association with leave to amend and struck the unfair competition claim on October 21, 2011.  Plaintiffs then filed a Second Amended Complaint in November 2011, limiting their claim to false advertising under the federal Lanham Act.  In response, some, but not all, of the defendants filed a Motion to Dismiss in December 2011, which remains to be ruled on by the court.

One year in and 74 docket entries later and the sugar side recognizes it has a hard row to hoe against the corn refiners who have continued with their “corn sugar” marketing campaign:

Enough Is Enough: There’s Only One Sugar… And It’s Not High-Fructose Corn Syrup (via PR Newswire)
WASHINGTON, May 24, 2012 /PRNewswire/ — In recent weeks, there has been a rash of inaccurate reports about all-natural sugar. These reports have continually misrepresented the facts surrounding several scientific studies, overlooked biological differences between all-natural sugar and man-made sweeteners…
Continue Reading

Image from Pipeline Association for Public Awareness Why obey federal trademark law (aka the Lanham Act) when you can just pass a new law that exempts you from it?  Montana's…

The USPTO scores big with LINSANITY! As of today, no fewer than 8 US trademark registration applications have been filed at the USPTO to protect the mark LINSANITY.  (Note --…

Pontifications
Shining the Light
On the Road
Recent Posts
Recent Comments
Categories
BrandGeek: Protecting the Brands that are Changing the World® We’re passionate about creative puzzle solving and connecting the dots. We love connecting with social enterprises that desire creative solutions to their intellectual property management.
Get In Touch